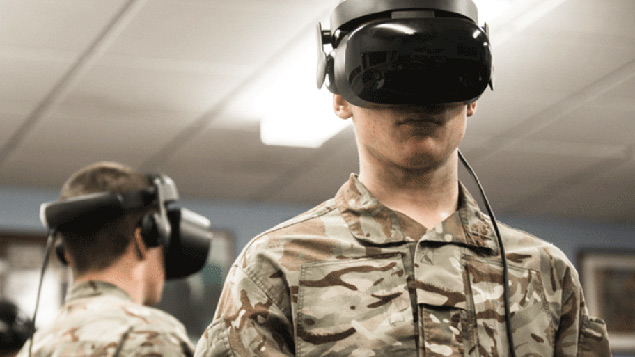 The Ministry of Defence is to trial a new virtual reality platform for military personnel in an effort to make training more realistic, intuitive and immersive.

Software company SimCentric has been awarded £300,000 by the Defence and Security Accelerator (Dasa) to develop and trial the simulator following successful trials with the Parachute Regiment and officers at the Infantry Training Centre in Catterick, North Yorkshire.

Further tests with the Army, the Royal Air Force and the Royal Marines will take place later this year as part of the Armed Forces’ wider training programme, to support and enhance real-life training exercises.

It can be used by more than 30 personnel at a time and uses “intuitive gesture control” to match real actions on the battlefield. High-definition surround sound and realistic graphics bring scenarios to life, according to a statement.

Rather than click a mouse while sitting at a desk, soldiers will be able to hold a virtual gun and crouch and crawl when necessary, just as they would on a real-life exercise. They will be able to practise this virtual exercise before going into the field for real, preparing them more effectively for operational deployments.

Tom Constable, director of innovation at SimCentric and a former office in the Army Air Corps Officer said: “As a veteran and current reservist, I’m proud to help train the armed forces of the future.

“I joined the Army in 2006 and later served in Afghanistan. This gave me a passion for building technology that will reduce the risk to our armed forces and improve the quality of training, with the ultimate aim of saving lives.”

Working alongside members of the Royal Marines, Army and Royal Air Force the trials will run throughout 2020 and focus on three major areas:

“We’re thrilled to have this opportunity to work so closely with the UK MoD,” added Constable. “The Dasa contract will allow us to conduct assessment, validation and trials of our immersive reality Saf-Tac platform with unprecedented access and support across all three services.”

Professor Dame Angela Mclean, chief scientific adviser to the Ministry of Defence, said: “The MoD is committed to developing radical and innovative ways to combat the challenges our armed forces face today, and equip them for the threats of tomorrow.

“This new simulator is just one way we are bringing training into the next generation, using technology drawn from the world of gaming to support our troops in training.”

The MoD added that the training platform would make cost-savings.