Furloughing staff is morally wrong and HR should stop it 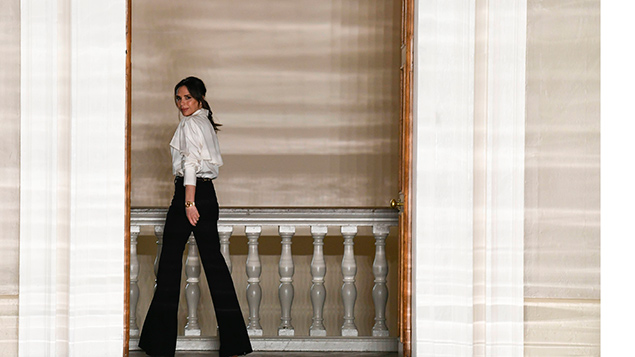 Victoria Beckham faced a backlash for using furlough. A spokesperson said: “We are working hard to ensure our much-valued VB team are protected by keeping our business healthy. Having carefully assessed all our options, we made the decision to furlough a proportion of staff on an enhanced package.” Photo: Ik Aldama/DPA/PA Images

Employers up and down the country are defaulting to furloughing their staff – when HR directors should be asking whether they really need to, indeed whether they are and are morally right to. Josh Sunsoa believes some employers are “on the take”.

I suspect firms are using the scheme simply as a way of controlling costs, or even giving staff a status that might give them false hope about their future status. After all, why get rid of someone now, when they can be easily furloughed?”

Furlough. If we’re being honest, it’s a word many of us hadn’t even heard of just a few weeks ago.

But if projections by the Resolution Foundation prove to be correct – that 12 million will be put on what is effectively gardening leave – then we’re in for one hell of a time. Three days since opening its Coronavirus Job Retention Scheme portal (22 April), HM Revenue and Customs said 435,000 employers had claimed wages of £3.8bn on behalf of 3.2 million employees.

Don’t get me wrong. There’s absolutely a reason for it. We’re living in unprecedented times. By the impositions of government, many businesses – through no fault of their own – have lost practically 100% of their revenue. Compensation, in essence to hibernate these organisations, might be the capitalist solution of last resort, but it’s a solution adopted the world over. And it’s one that ultimately the taxpayer will have to bare.

But that’s also why I’ve got such a big problem with it. It’s for one main reason: Has anyone really stopped to think about whether HRDs really should be so blatantly, for want of a better phrase, “on the take”?

Already we’ve seen the seeds of a furore surrounding multi-billion-pound football clubs. It was Spurs and Liverpool initially, before both U-turned due to a public backlash for furloughing its non-playing staff while continuing to pay £100,000-plus weekly wages to its star players for doing nothing.

Last week Victoria Beckham was lambasted for furloughing 30 staff from her fashion label, despite having her own personal fortune of close to £335m. But these high-profile examples are really just the tip of the iceberg and this should be troubling to more people.

All around me, I’m seeing a mini-industry emerging, of lawyers, consultants and other HR quidnuncs all advising firms place their staff on furlough regardless of whether they need to.

The attitude is “why not?” Government is giving out free money. Not only is there a scramble to take the cash without really thinking about why (or if) it’s actually needed, I suspect firms are using the scheme simply as a way of controlling costs, or even giving staff false hope about their future status. After all, why get rid of someone now, when they can be easily furloughed?

Businesses are either deciding for themselves, or are being told to take advantage of a situation while they can. It sits uneasily with me because essentially, the ethics of whether it is right, or wrong, or necessary, have gone out of the window.

Staff in businesses that are cash-rich, for instance Disney, are being furloughed – companies which could easily ride this crisis. Why aren’t HRDs pressing their CEOs to say, do we actually need this help? Why aren’t they asking: “Are we depriving money to firms who really do desperately need help?”

I’ve no doubt my utopian view of the world will be met with derision – why should companies burn their own cash reserves when government can write a cheque for them? But to those with this view, I say they’re missing something. In times like these, I don’t think employees should be treated as people that firms can simply “do a deal with government” with.

Employers all harp on about being responsible to their communities, and to the society they are a part of, but how is this being good to society? It’s entirely likely many firms that have no cash reserves, will nevertheless go under. Meanwhile, big multinational corporations will say, “thank you very much”.

Ultimately, the problem with furlough is that it’s a scheme rather than anything with watertight legislation behind it. My preference would be that government sets more legislative rules, so that there is protection for businesses who really need it. Maybe, for example, it should disqualify firms from having government money if they have X-months’ worth of their employees’ salary in the bank – just like Universal Credit already prevents individuals with large savings from taking taxpayer money.

Research by XpertHR last week found that just 35% of firms plan to top up their furloughed staffs’ salary from 80% to 100%. Right now HRDs need to take leadership about what the public, as well as internal brand reputation damage actions like this cause.

At the moment, I feel the temptation to take free money seems to have got the better of us all. It’s sad to see business being done in this way. I wonder how many HRDs will really stand firm and ask what appears to be a very moral question – do we really need to do this?