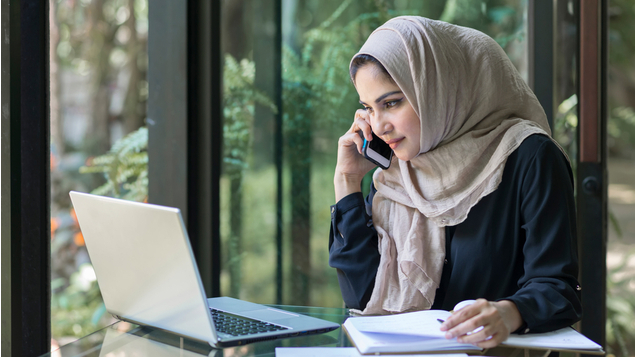 What do you need in your wardrobe if your work takes you to the Middle East? Should HR help employees understand what not to wear when working with certain faith-based organisations in the UK? Ashleigh Webber listened into this week’s parliamentary round table on the topic of ‘modest fashion’.

According to panellists at a discussion on religious dress at work, HR needs to play a leading role in ensuring business travellers are prepared for and understand the cultural and religious reasoning behind dress codes in the Middle East, and in breaking down stereotypes that might exist.

In Saudi Arabia, for example, religious and cultural gender regulations and norms require women to wear an abaya – a long, loose-fitting garment that covers their whole body apart from their head and face – and sometimes a headscarf.

Women in the UK who work for faith-based organisations, such as schools and charities, may also need to abide by modesty dress codes in certain environments.

HR consultant Clive Bane said HR teams need to draw up policies, monitor their effect, and sometimes adjudicate where there are disputes around whether somebody has dressed appropriately.

“HR needs to be alive at an operational, day-to-day level in ensuring that those female staff that they are either posting to countries [in the Middle East] or sending to those countries for projects or special assignments, get the necessary additional support required. Advisory, but also financially as well, because there are in inevitably additional costs associated with that work,” he said.

HR professionals also need to better understand religion and belief, which he said are the protected characteristics often “forgotten” by HR.

“HR does need to play a leading role in encouraging their organisations to break from either implicit, or sometimes explicit, judgments about shame… it’s a very interesting concept in ensuring diversity and inclusion,” said Bane.

“There is currently a significant gap between HR’s understanding and the strategic interventions in this area, and what is needed to make their workforce appropriate to the culture they’re operating in.”

Dr Kristin Aune from Coventry University suggested that employers should bring in external experts to advise on company policies.

The event coincided with the launch of a report by the London College of Fashion at the University of the Arts London and Coventry University, which compares the experience of workplace modesty codes at UK faith-based organisations (FBOs) with the experience of women at secular employers whose work took them to Saudi Arabia, where they had to abide by Saudi regulations about women’s dress and behaviour.

Non-religious women or women of non-Islamic faiths travelling to the country for work sometimes experience confusion and anxiety navigating the dress code because of insufficient guidance before they travel, the researchers found.

“We found that in both faith-based and secular sectors in the UK and in Saudi Arabia, women have to invest additional time and expense to develop a modest work wear wardrobe,” said Reina Lewis, a professor of cultural studies at the London College of Fashion. “Yet, nowhere is this recognised or recompensed as a contribution to their organisation.”

We found that in both faith-based and secular sectors in the UK and in Saudi Arabia, women have to invest additional time and expense to develop a modest workwear wardrobe” – Reina Lewis, London College of Fashion

Guidance produced by employers is sometimes limited, and the women who took part in the study said they wanted more advice around purchasing and wearing an abaya and Saudi norms for social interactions between men and women.

The report finds that the knowledge of HR managers and equality, diversity and inclusion specialists around religion and belief was less advanced than other protected characteristics such as gender and ethnicity.

It recommends that employers:

Some non-religious women who work at faith-based organisations generally dress to respect religious norms, but the report suggests many feel uncomfortable adhering to conservative gender norms.

In UK FBOs, LGBT+ women whose gender presentation is non-heteronormative may also face additional psychological challenges when deciding how to dress for work in conservative religious contexts, the report says.

However, as a UK FBO employee’s religious affiliation tends to be the same as the FBO’s, some women did not need to make changes to the way they usually dressed in order to go to work, and some female-only religious workplaces gave them more freedom in the way they dressed.

The report recommends that faith-based an interfaith organisations should:

The panellists suggested that the pandemic had presented further challenges around dress codes for Muslim women and organisations doing business with customers in countries including Saudi Arabia – particularly how to dress on video calls.

Will the widespread use of face masks during the Covid-19 pandemic change attitudes to Muslims wearing face veils?” – Rabiha Hannan, University of Leeds

Rabiha Hannan, who is studying for a PhD in gender equality in Islam at the University of Leeds, suggested that women now had to be aware of their surroundings at home to avoid immodesty on video calls, such as housemates appearing in the background in inappropriate clothing. But, as video calls only tend to show a person’s head and shoulders, it meant they could wear more flexible clothing out of shot.

Hannan also suggested that the wearing of face coverings during the pandemic also challenged damaging cultural perceptions of Muslim women who wear burqas or veils.

“Will the widespread use of face masks during the Covid-19 pandemic change attitudes to Muslims wearing face veils? Many of you will remember comments by our Prime Minister in 2018 of women looking like ‘letterboxes’ who struggled to communicate with others. And yet today, we’ve all become letterboxes,” she said.

“When leaving the house, we all have to think of innovative ways to communicate without the British handshake. And through expressive motions of our eyes to show people that we’re happy, we’re sad, we’re empathetic, or engaged in what people are saying.”