Typical pay awards could fall to 1% 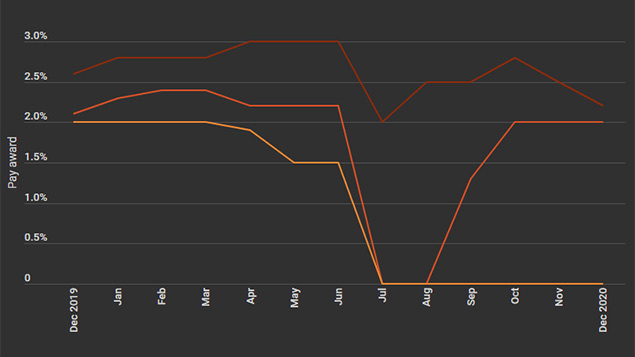 Annual pay awards have steadied at a median of 2% in the three months to the end of December 2020 and are unchanged for the third consecutive rolling quarter, but early indications suggest pay settlements in 2021 could be half as much.

The early signs from 2021 suggest that the situation will deteriorate further, with pay freezes more common and pay awards well below the rate of inflation” – Sheila Attwood, XpertHR

Whole-year data shows the extent to which pay awards have been affected by uncertainty surrounding the Covid-19 pandemic. Having stood at 2.4% in February and March, XpertHR’s rolling three-month median fell to a pay freeze in the middle of the year, before gradually picking up to 2% in the final quarter. The lower quartile remains at 0%.

The research is based on the largest sample of pay deals collected in the UK – XpertHR collects details of pay settlements for around 1,600 employee groups each year.

Based on a sample of 31 basic pay awards in October-December 2020, XpertHR found a decrease in the number of higher-end pay awards. Lower pay awards dominate – 62.5% of pay deals in a matched sample are worth less than the same group of employees received in 2019.

Pay freezes continue and more than a third (35.3%) of all pay reviews resulting in no increase for staff.

The private sector followed a similar trajectory to the economy as a whole, but public sector pay awards were maintained at a 2.5% median throughout the year. Within the private sector, pay awards held up slightly better in the services arm than for manufacturers.

Few employers review their pay in the final quarter of the year. Analysis of the first 67 organisations sharing their January 2021 pay reviews with XpertHR, a fraction of the expected sample, suggests a median pay award of 1%.

Pay freezes continue to feature heavily, accounting for four pay settlements in 10 (40.3%), although organisations making a pay freeze often agree to do so quicker than those increasing pay, so the proportion of pay freezes is likely to fall as more data is collected.

XpertHR pay and benefits editor Sheila Attwood said: “In terms of pay awards, 2020 was characterised by high levels of uncertainty translating into lower pay increases and in many cases, pay freezes. The early signs from 2021 suggest that the situation will deteriorate further, with pay freezes more common and pay awards well below the rate of inflation.”

Yesterday, the Office for National Statistics announced that the Consumer Prices Index including owner occupiers’ housing costs (CPIH) was 0.8% in the year to December 2020, up from 0.6% in November. The Retail Price Index (RPI), the inflation measure often referred to in pay negotiations, grew to 1.2% in the 12 months to December, up from 0.9% in November.