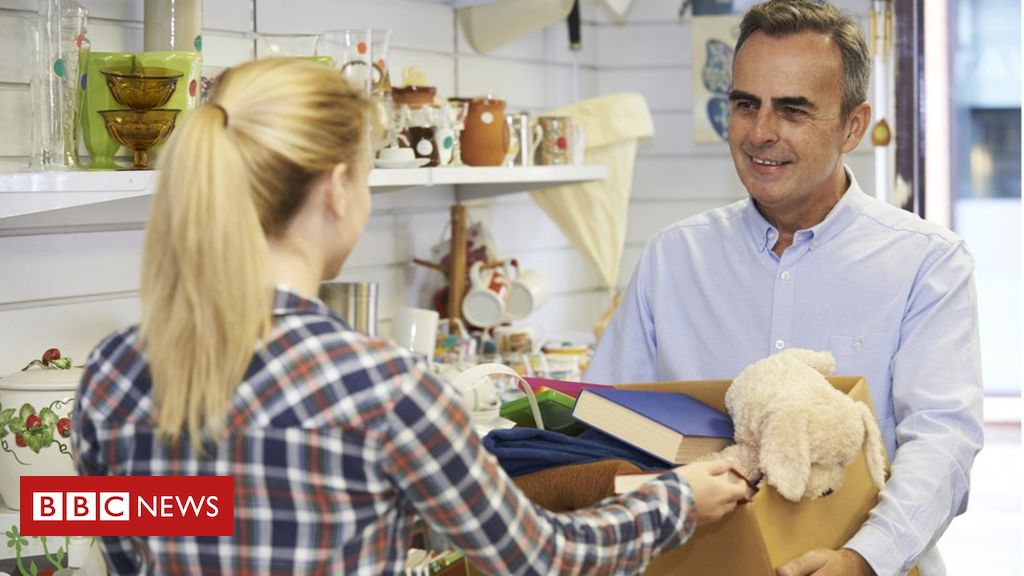 Charity shops fear deluge of donations when they reopen in June

Charity shops fear deluge of donations when they reopen in June


Charity shops fear they will be deluged by donations when they start to reopen in just over two weeks.

English stores will start opening their doors on 15 June, in line with government guidance.

But they face a number of challenges after the coronavirus closures with all new offerings set to be quarantined for 72 hours.

Robin Osterley, chief executive of the Charity Retail Association, says shops are expecting to be “full to bursting”.

Many people in lockdown have taken the opportunity to clean out their homes.

Mr Osterley said: “We’re not just anticipating a normal three months’ worth of donations but also the extra stuff that people may have picked out to donate during their clean-ups.”

He urged people to “be thoughtful about the sorts of things you’re donating”.

Barnardo’s, one of the country’s leading charity shop chains, is advising customers to call their local store to ensure the shop is able to take the items, in order to help manage the expected influx.

Oxfam is asking customers to stagger donations to avoid items being left outside: “We welcome that many people are taking the opportunity to de-clutter during lockdown and are asking people to hold on to those items and donate them when shops and donation banks are open again.”

“Charity retailers are thinking carefully about which shops in their chains to open first,” pointed out Vicki Burnett, senior consultant at the Charity Retail Consultancy.

“Many are planning a staged approach, opening the more simple-to-manage stores first and leaving the more challenging ones to later.”

British Heart Foundation has the biggest branch network with 750 stores.

“From mid-June, we will reopen a small number of BHF shops to establish new safe ways of working with others to follow,” said Allison Swaine-Hughes, retail director at British Heart Foundation.

Barnardo’s, the second-largest chain with 710 stores, will be opening 70 at first with a number of new safety measures.

Oxfam, the third largest with around 650 shops, has yet to decide when to re-open stores: “Our priority remains the health and wellbeing of our staff, volunteers and customers,” the charity said.

Cancer Research UK, with 600 stores, plans a phased-reopening from 29 June.

Charity shops rely on the UK’s biggest army of volunteers to keep them going with 233,000 people all over the country lending a helping hand.

But, in contrast to the excess of stock expected, here they are bracing for a shortage: “We are expecting a temporary shortage of volunteers when shops re-open again,” said Robin Osterly.

“Some may still be in isolation because of the Covid-19 crisis, while others may simply have fears of being out and about” he pointed out.

“A large proportion of charity shop volunteers will be over 70 and therefore in the vulnerable category and it is inevitable that some volunteers may never return to the roles they had before lockdown,” said Vicki Burnett.

“But lots of staff and volunteers are also desperate to get back to their shops, having missed the camaraderie and sense of purpose it provides, as well as to return to some form of normality.”

There will be some recruitment activity going on over the coming months, she said.

Charity shops have many fans who delight in being able to snap up good quality second-hand items at decent prices.

But will they rush to return to the shops with coronavirus fears still in the air?

“I think it is very unlikely I’ll be buying second-hand clothes again for a long time,” said Elizabeth Mistry, a journalist and carer who is a keen user of charity shops.

“But I might not be able to resist nipping into Oxfam books just to see what they have – though it would have to be something really special in the short term to actually buy it.”

Elizabeth is worried about where donations may have come from. “Will future donors have to ID the donations for traceability?” she asked.

She is also concerned that the virus may last on cardboard or paper.

“I’d leave a book outside for a day or two in the sun – and even then I would wipe the cover and spine down before bringing it in.”

“They already have great hygiene processes in their shops when it comes to sorting goods – items are washed, steamed or cleaned and this will only increase in the current situation.”

Goods that come in will be isolated for 72 hours before being sorted.