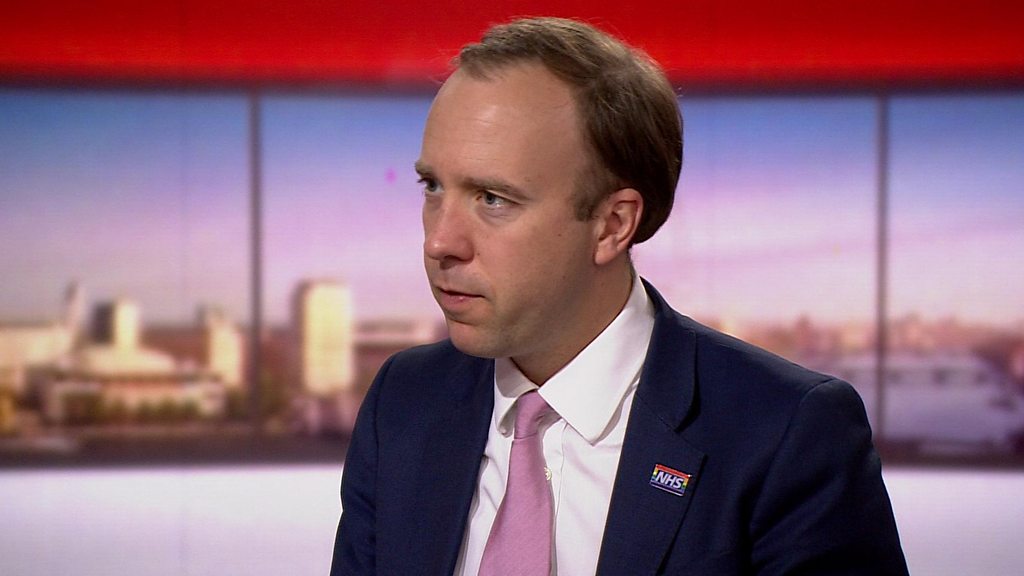 
The government will “bring forward proposals” on how to safely reduce the 2m social distancing rule in England this week, says Matt Hancock.

The health secretary said the distance could be lowered with “mitigations” to cut the risk of transmission.

Labour said it would support a change to 1m “under certain circumstances”.

Mr Hancock confirmed new easing of lockdown measures would be announced in the coming days, including whether pubs and restaurants can re-open on 4 July.

Boris Johnson said the government was “sticking like glue” to the roadmap it announced in May – when it said the venues could re-open on 4 July “at the earliest”.

He added: “We are going step-by-step, making things easier for people, helping people to see more of each other, allowing more social contact, more social interaction, and we will be setting all that out.

A further 43 people who had tested positive for coronavirus have died in the UK, it was announced on Sunday.

There was one death in Wales, but no deaths were recorded in Scotland or Northern Ireland over the previous 24 hours.

Mr Johnson announced a review into the 2m rule last week, with Chancellor Rishi Sunak confirming on Saturday its conclusion would be published this week.

But speaking on the BBC’s Andrew Marr programme, Mr Hancock appeared to go further, saying: “The proposals we’ll bring forward are how you can safely reduce the 2m with the sort of mitigations we’ve been talking about.”

He said there were “all sorts” of measures that could be introduced, referring to the use of face masks on public transport, Perspex screens in shops, and studies on the reduction of transmission risk when people sit side-by-side or back-to-back.

But while the health secretary said he “very much hopes” to reduce the distance, the government would be “guided by the science”, and would only make changes “in a way that is safe and doesn’t lead to resurgence of virus”.

The government has faced pressure from leaders of the hospitality sector and its own MPs to lessen the 2m rule, with widespread concerns around the impact it would have on the UK economy.

The World Health Organisation recommends a distance of at least 1m (just over 3ft), but the UK government’s scientific advisers say that being 1m apart carries up to 10 times the risk of being 2m apart.

The other nations of the UK are yet to announce any plans to change the 2m distance rule.

A coronavirus adviser to the Welsh government said the risk in reducing the distance “isn’t very big”.

Officially, the review is still under way. But it now seems inevitable the result will be a move from a 2m social distancing rule in England to 1m.

The government is set to announce this in the week ahead – probably alongside a confirmed date in early July for pubs and restaurants to reopen, under certain conditions.

Scientists seem relaxed about this change – the chief scientific adviser Sir Patrick Vallance having indicated that, ultimately, this is a political decision, with no continuing body of evidence to stand in the way of the move.

A member of Sage, Professor Calum Semple, says he has changed his mind and it is now reasonable to “relax these rules”.

It’s understood there will need to be “mitigation” – requirements to stop overcrowding in bars, taking contact details of people booking restaurant tables and a more widespread use of face coverings, for example.

But as the eminent microbiologist Prof Peter Piot reminded us today, the virus won’t just fade away. He said it will be with us for some time and a second spike of some sort was highly likely.

The pubs and bars may reopen in England and Northern Ireland within weeks (Scotland and Wales are keeping the issue under review).

But no health or scientific official or adviser will be celebrating any time soon.

Labour’s shadow health secretary, Jon Ashworth, said his party were “prepared to look at [the proposals] carefully”, adding that if a change was “backed by the science, then that’ll be an understandable move”.

But he said countries who have lower social distance rules also have a “broader combination of measures”, such as face shields and tracing apps, and his support would depend on other mitigations being introduced.

Mr Hancock also said pubs and restaurants would find out this week whether they can re-open on 4 July.

He said the potential date was “part of the plan that we’ve been working through” since it was announced last month as a possible next step.

Mr Hancock said he “wouldn’t rule out” following in the footsteps of countries like New Zealand – where customers need to register their details before going to the venues – as it could be “an additional way that you can do contact tracing so that you can find people who might be at risk”.

But he said there were “lots of ideas out there” and the government would confirm its plans this week.

How have you been affected by the issues relating to coronavirus? Share your experiences by emailing haveyoursay@bbc.co.uk.

Please include a contact number if you are willing to speak to a BBC journalist. You can also contact us in the following ways: